1) How do you define yourself racially or ethnically and why is it important to you?

Chinese-Canadian or Canadian-born Chinese. My partner is German-Canadian. We’ve been together over 20 yrs.

2) Where do you live? If you have ever moved, whether to another city or the other side of the world, please tell us when and where, and the ways the cultural differences between the places shaped or made you think about your identity.

I’m in Calgary, a city of over 1.3 million people in Alberta, a province of Canada. This city is a big contrast to Vancouver and Toronto where I also lived for over 30 years. These cities have higher proportions of Asian-Canadians who can be quite vocal. Calgary is still quite conservative in areas of social justice, which includes race relations. This means far more subdued self-expression. I grew up not far from Toronto: Waterloo had a German-Mennonite base which throws Canada’s largest Oktoberfest annual festival. I had German-Canadian classmates who proudly wore their dirndls and lederhosen during Oktoberfest week. I thought every city had traditional Mennonites, and discovered I was wrong when I moved to Toronto. I learned about local Mennonite history when I was 13, long before I learned about Chinese-Canadian history in my final year 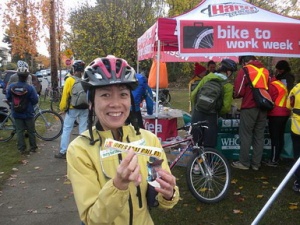 in high school. Prior to that, the curriculum was still stuck in British colonial history and the French-Canadians. As I grew up, I noticed my loss of Chinese fluency; the kind of food I ate at home, which was not steak and potatoes; and a nonEuropean family history. It was a revelation when I moved to Toronto in my 20s and felt less conspicuous with more Asian faces in the crowd. I participated in Chinese-Canadian community events, amassed a book collection of Asian-Canadian and American authors, and volunteered for five years with Asianadian, a literary magazine that specialized in Asian-Canadian issues and experiences. I met and was inspired by other volunteer writers and organizers from various Toronto ethnocultural groups who had a strong bold voice. I left the magazine to volunteer for a national Chinese-Canadian organization on race relations and immigrant matters. In the 1980’s, the Chinese Canadian National Council was led by a few young, inspiring volunteer board members in law, medicine and social work. They are community leaders today in Toronto and through them, I learned to find my voice to speak up and be less afraid.

3) How diverse was the neighborhood and school you grew up in?

We were the only nonwhite family on the street, downtown. I grew up quite aware that less than 25 students out of 2,000 were of Asian descent in high school – 1/5 of them my siblings. Very few blacks and East Indians also when I was a teen.

4) When did you first become conscious of your race or ethnicity?

First day in kindergarten. I was shocked to discover I didn’t know any English. I had spoken only Toishanese, a dialect not very well known nowadays. During the first few months of school, some white boys threw stones at me, tried to trip me and called me “Jap”. I didn’t know why they were being cruel. For a few weeks, I had nightmares of being chased. The first three years of school, I received in-school English as a Second Language support, which added to the vague feeling of being an outsider. So I was very shy. The lack of confidence to speak and present before groups did not truly dissipate completely until I was well into my career – in my 30’s! I am quite different now than when I was in university. I realize that though I was born in Canada, my early years have helped me to empathize with the struggles of immigrants. Now I’m in reverse. My spoken Chinese has degraded so much that I cannot communicate in a deep, meaningful way with my mother. I did have some very good white friends even though they couldn’t completely understand the cross-cultural challenges since they did not have immigrant parents and bilingual communication problems at home.

5) Do you consciously gravitate to certain company? Are you more comfortable, more at home around people of your own ethnicity? Have you observed a social or behavioral tendency in your own people group you would rather not perpetuate?

For the past three decades, I have gravitated to people who share my interests, activities and values rather than seek relationships primarily along ethnic-racial lines. Earlier in life, I did actively seek out some friendships within the comforts of ethnicity. I wanted to understand my own identity – what things unite us and distinguish us. The Chinese-Canadian communities in all the big cities where I’ve lived are huge and highly diverse. Metro Toronto alone has over 400,000 residents of Chinese descent. Their families no longer come from the same southern province my parents and other Chinese immigrants did from the 1800’s to early 1960’s.

As for preconceptions, you have the typical academic or technically oriented Asian-Canadian. I tell people my math skills are limited, borne out of sheer need for survival in jobs that require interpreting basic management data. What would you expect of an English literature university grad? I avoided math courses in my final year of high school. That’s when my parents realized I was not like my siblings who did have stronger mathematical skills and did their university degrees in the hard sciences. I was the teen who stuffed in as many art courses as possible in school, wrote poetry and loved literature. Most likely my creative tendencies are reflected in my blog. Obviously not all people within an ethnicity will fit the mold.

6) Tell us a little about your family, the generations who first came to America.

My great-grandfathers, coincidentally on both sides, worked in Canada and the U.S. for several years in the early 1900’s. They went back to their families in China when they could. The federal Chinese Immigration Act in North America barred Chinese men from bringing their wives and children to Canada and the U.S.. Both countries feared being run over by the Chinese and worried about job competition for whites. After building the national railroads for both countries, the only type of work the Chinese could get were in laundromats and restaurants. The law affected Chinese family structure and family.

Chinese-American and Chinese-Canadian soldiers and nurses died for Canada and the U.S. during WW II even though they could not vote at the time. Their allegiance and sacrifice turned Parliament in Canada and Congress, and the Chinese were eventually granted the right to vote – just a few years after my father immigrated to Canada. My mother was a picture bride. Met my father for the first time when she got off the plane in Toronto. They were married within a week. I’m the eldest of six. Two of my siblings married Caucasians.

7) Are your most meaningful relationships with people of your own ethnicity?

My most meaningful relationships are not restricted to my own ethnicity but certainly my family was instrumental in shaping my identity in my earlier years.

8) How much does racial affinity give you a sense of belonging compared to a shared faith or interest? Where do you feel the greatest ease and connection?

Racial likeness isn’t enough. I connect better if I shared a passion like cycling or art as well as cultural-life experiences like food, tradition and personal values. About 60% of my home meals are Asian-based though I stopped eating rice over five years ago to stave off Diabetes 2.  My circle of friends is moderately diverse. After spending time last week with a Japanese woman visiting our city, I realized that my closest, long-standing nonwhite friends were all of Chinese descent. So for the past five decades after living in big Canadian cities, I’ve never really known anyone well with family roots in Korea, Vietnam, etc. It’s all been just superficial, pleasant working relationships with others so far. But for me, friendships last because of happenstance, trust, empathy and the right vibe.

9) How did you set out to secure a sense of acceptance and belonging in social contexts, especially if you have faced hurtful experiences?

I found solo activities I enjoy which allow me to explore, destress, grow in skill, so that I wouldn’t depend on acceptance according to someone else’s standards. I first wanted to satisfy what I felt was right for myself. I tend to distance myself or just ignore others, often strangers, who have been hurtful or overly negative. It helps a lot to have a set of great friends who have known me a long time. Life is short and my energy is limited. I have also found solace in writing poetry and doing art on my own – creative channels and antidotes for loneliness.

10) Do you feel it is not fully possible or even imperative to shed all racial stereotypes and judgments?

I can shed my own judgments if I stop and reexamine my own biases and perceptions. I can’t say though that I’m conscientious enough.

11) What has struck you the most in working through this exercise? Any closing thoughts on race and identity you would like to share?

The write-up raised a curious point that I haven’t explored such a pertinent part of my life on my blog. I haven’t completely figured out if I want to spend time and energy on racism, stereotyping, cross-cultural conflicts and pain.  It has been a long journey in learning how to stand by my own identity and voice in the most authentic way. The journey is not over.

Is there mercy when there is hate and war in this world? Sometimes it means immigrating to a completely different country to lose personal biases or historic influences. Or it takes the 2nd, 3rd generation being raised by parents with healthier, more conscious attitudes. Since my parents did not directly experience the atrocities of the Japanese army in China, they don’t have the historic negativism toward the Japanese.