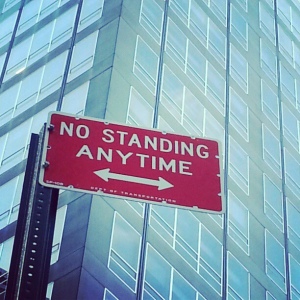 Peter asked that I tell this story from our dating days.

It begins in the laid-back land of Southern California where entire cities don’t push to cut their way through throngs of cars on impatient legs, daring drivers to run over them. Pedestrians actually keep to the crosswalk and – to the stupefaction of visiting New Yorkers – can be ticketed for jaywalking. Most parts of the west coast, in fact, don’t see people milling in masses – simply because they don’t walk. In the state formed out of freeways, your wheels are your feet. California streets also aren’t so talkative as crowded eastern cities are, with their slew of parking signs that dictate when and where vehicles may stop.

In love with the girl who had disavowed the fast pace of New York for the peace of the Pacific, California Boy flies out for her old stomping grounds to ask her father for her hand in marriage. She jump-starts her reunion with her parents and the love birds plan to meet in the City the morning he arrives.

It is Peter’s first taste of the Big Apple.

The first thing to overwhelm him at Grand Central is the moving multitude. Never has he seen so many…people. In such a hurry. Everywhere. Struggling with the luggage he realizes he doesn’t have the hands for in a place where most go on foot, Peter somehow drag-pushes it all out of the station to the sidewalk, hopeful for a taxi – when he notices the No Standing sign above his head.

I’m not supposed to stand here?
How…do I flag a cab, then?
But it says no standing. Anytime.
Oh, what if I get a ticket?

California Boy shuffles the mountain of bags a few yards this way. Looks around. Some minutes later, a few yards that way. His heart quickens. He keeps up the goofy dance until he makes the connection between the light atop the cabs and the vacant backseat. That’s how you grab a taxi. Relief.

He hails a car and slumps in the backseat.

My friends and family were rolling, doubled over, when Peter shared his first nervous moments in the urban East. He’d had no idea the No Standing was a prohibition against vehicles looking to park there. If pedestrians were ticketed in New York, the city would transfigure into a ghost town. I’ve never given thought to the sign until this writing. Having grown up with it, it never occurred to me that someone could think it applied to anyone other than drivers. Do you have these signs where you live?

While we’re at it, here’s a glimpse of a fun memory from the trip. We had a blast swing dancing in the city, a night out on the town. You see, it was at a ballroom in California where we had met.