Forty-two days after burning in a horrible fatal crash, Lauda jumped back on the Formula 1 track to defend his championship title against Hunt. Single-mindedness. Insane resolve.

I wasn’t into racing, but this was my kind of story. 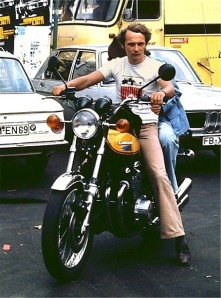 The film Rush opens with a portrait of Hunt as a handsome, charismatic, successful racer, the world at his feet. Popularity and raw talent smile upon him. The pursuit of dreams for Lauda, on the other hand, is a fight from the get-go. Unable to lean on his illustrious family name, he risks everything to raise support and to bargain no-holds-barred for his first contract. Lauda becomes an expert on auto parts and aerodynamics, and exacts the fastest race car possible out of his engineers. It is the hospital where he will find himself in his fiercest battle. Both men embody greatness, but Lauda has my attention in the life-altering crash that almost claims his dreams and the way he handles the tragedy.

What do daredevils do with the fear? Bury it under the adrenaline? Just swallow it? Hunt, who seems to laugh at danger, throws up before every race. His eyes also betray the gnawing anxiety every time he comes across cars incinerated off the track. At the eleventh hour of the famous 1976 Grand Prix in Germany, Lauda calls a meeting to boycott the race in the face of the torrential rain. He has no peace about the circuit’s safety arrangements. Going through with the event is obviously asking for it. Hunt turns the room full of men who are scared alike, flouting Lauda as a self-serving coward unwilling to allow others a chance at the win. Classically high school, afraid of looking chicken as terrified as they are for their life, the guys put it to vote and the race goes on.

Lauda punctures his fuel tank, crashes at 170 mph, and the Ferrari erupts into flames. With the rescuers having trouble getting him out, he is trapped for over a minute in the inferno.

That he lives is a miracle. Lauda resists death by sheer force of will. The graphic hospital scenes, not for the faint-hearted, depict the human spirit at some of its most astonishing heights. On Day 28, the doctor comes to vacuum his lungs and warns it’s not going to be nice. He slips what looks like a very long thick metal rod down his throat to hose grey water and blood back up through a tube. Lauda grips the bed for life. And through roasted eyes that barely open, he watches Hunt on TV shaking his trophy. “Do it again,” Lauda orders through bruised lungs. He remains captive in bed as Hunt takes race after race on the screen, gaining upon Lauda’s lead in the world championship. You cringe with him the day he attempts to put his helmet on over the raw skin that is his head and face.

Ready for another victory on the tracks of the Italian Grand Prix with his rival out of the way, Hunt is stunned to learn Lauda has showed up six weeks after the accident. The movie doesn’t show him peeling off the blood-soaked bandages he undid in reality on site. Hunt approaches his arch nemesis in one of several poignant exchanges. He admits responsibility for swaying the vote that fateful day. “Yes, I watched you win those races while I was fighting for my life. You were equally responsible for getting me back in the car,” answers Lauda.

Lauda pushes himself to higher ground off the best of his opponent. No excuses. Not the ear he’s lost along with almost half his face and head. No matter that charred lungs protest every breath and his skin screams to the touch. He concentrates on what’s louder, the vow to remain equal to none. Rest? Heal? He might as well hand the years of his sweat and showdown with death over to his enemy. Lauda has fought many times over and there remains nothing but to preserve all he has built and achieved from scratch, the record of his undying determination. To be ruthless with his foe is to be so with himself.

The roar and smell of engines come at Lauda – trauma and inspiration. I wonder about the things that assaulted his mind as he waited to spring forward once again on that impossible road. The real racer off screen admitted to having been absolutely petrified, as credible heroes go. As some of us know, it is extremely difficult getting behind the wheel again after any auto accident.

The cars take off – and one after another pass Lauda. Sluggish, he weaves onto grass. Then drivers collide in front of him and he manages to clear through the alarming confusion. He surges forward. I won’t say how he places in the race but the crowd that rallies to this champion afterward reveals something of our longing to look up to, even worship, those who conquer themselves and light our hope.

Every race that follows the crash revisits the question of wisdom and foolhardiness, of fear and courage – and offers the men the chance to choose security over risk. The finals for the world title in Fuji finds Lauda at 68 points to Hunt’s 65. And it’s pouring. This time it’s Hunt who tries to call if off but the forces that be push the event forward. Drivers gun their engines at the starting line and you see Hunt and Lauda, grim inside cars that look like sleek coffins.

I rein in the eagerness to comment on the climax of this saga. But some beautiful moments that speak of relationships and character redemption sparkle throughout the edgy drama. They explore what competition does for us. In speaking of the final match where Hunt risks all to burst through the ranks, he later says to Lauda, “Yes, I was prepared to die to beat you, and that’s what made it so great.” In a high-stake sport like racing, victory seems a triple glory: you’ve subdued your will, vanquished your adversary, and evaded death. Hunt lets us in on the thrill of live-wire living: “the closer to death you are the more alive you feel.”

The photo above moves me to see Lauda looking upon it from the other side of time. There he sits three years before the accident after which doctors would give him up for lost, three years before he would find himself permanently disfigured. The picture tells of dreams, talent, hope, fortitude – a destiny. Though Rush gives us glimpses of the answers, I am left to wonder. What lessons did he take away from the years battling Hunt? Did he gain what he desired? Did loss redeem triumph? Has he ever let himself down in racing? Did victory bring joy?

100 thoughts on “Greatness: Till Death Do You Part”