The past year I have allowed myself less guilt leaving Tennyson to play alone while I’m in the kitchen.  And I have seen played out what homeschoolers say: he is enjoying the space and time for his imagination to breathe, to create.  He has had limited experience with digital games, and watches DVDs on a TV with no functional channels.  I have wanted him neither dazzled nor dazed by the dizzy Screen.  I try to provide quiet opportunity for him to think, dream, to wonder. “What might this become?  What else can it be?”  Our boy was not particularly inventive when younger.  It was after four that he came into his own and began designing neat things with secondhand toys, stuff that’s caught Mom and Dad off guard sometimes in its humor, simplicity, utility, creativity.

Every handiwork of God unique, every blossom in its own time. 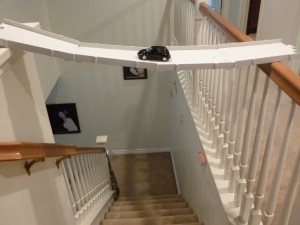 Some of my favorite constructions of his redeemed, last December, car tracks he had inherited without the remote-run cars.   One, “a suspension bridge,”  he declared.  The other, a chocolate factory.  He said he had a surprise for me, not to look ‘til he said ok.   Unveiling his enterprise, Tennyson recited the beginning of Curious George and the Chocolate Factory:  “This is George.  He is always very curious…..”  This particular episode runs like the famous I Love Lucy where L frantically shoves the pieces into her mouth as they shoot out from the conveyor tunnel on steroid speed.  Tennyson was going to add blackstrap molasses to the chocolate.  I’ll have to post his response when he takes his first bite of chocolate someday.