Listen to this, the 2014 Reader’s Digest: “LIMIT ARGUMENTS TO THREE MINUTES. John Gottman of the University of Washington found that the most important points in any argument can be found in the first three minu–
I’d LOVE that! I’ll hold up three fingers to signal time’s up and you have to stop being pissed.
— after that people often repeat themselves at higher decibels.
*Guffaw*

If you missed Car Accident – in the Garage, one of the first posts on the Holistic Journey, don’t enjoy the prequel to the latest mishap too much. In a hurry getting out of the house last week, I somehow backed out of the garage before the door had rolled all the way up. The damage wasn’t as horrifyingly extensive this time but the door has a new, shall we say, design. A mold of the back of the minivan.

I’ll need to fix it with somebody. The bump is too big to tackle alone and we have to keep mice and cats out.
*Hardly able to get the words out in the laughing* I know how we can fix it.
How?
Ram it from the other side.
*Laughing along* “That is really funny. And logical.

Actually, you are the perfect opossum. It looks cute but when you get in its face, it is one scary mother.
How do you know this?
I ran into an opossum once. When I was a security guard. I was patrolling the grounds at midnight and thought I saw a cat, thought I’d chase it away. When I reached it, I saw it was moving too slow for a cat. I thought, this is no cat. It’s an opossum. It bared its fangs at me.
What did you do?
I slowwly backed off, saying, “Whatever you want, honey. You win.” 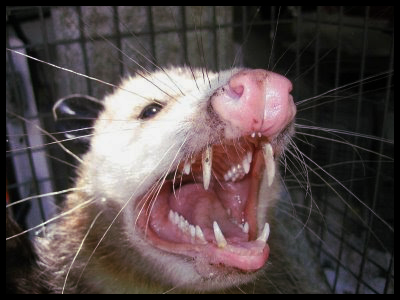 98 thoughts on “My Wife Is An Animal”