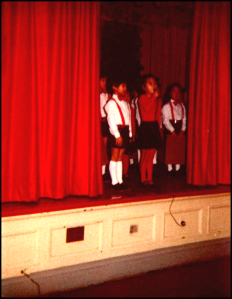 I imagine people don’t know what a recluse I am. I socialize at church and in the homeschool gatherings stand tall, take initiative, make announcements. My parents, struggling to piece together a life in a country where they were Other, taught their little girl to write large and speak loudly. That’s me in the school play, mike in hand. (My husband would now like me to lower my voice by 20%.) I’m usually the one to notice inefficient or unjust ways things are done in our different communities and the one to speak up. So I can pull off extrovert and can be sociable because I know it’s rude to sit next to someone for half an hour and say nothing. But all I want, oh all I want is to bolt the door and write. Bury myself in what novelist Dani Shapiro calls the Cave to give attention to the voices in my head, meet myself on the page. Because inside is where so much of my life is.

I would probably long for love and community if I were granted the hermit’s wish (er, I think). ‘Tis human to want what is out of reach. Look at me glaringly not in step with the vogue practice of being present. No, I can’t be fully feeling the current of the moment around my feet when my head is in books, ideas, memory. In my defense: we women are wicked multitaskers.

Speaking of tasks, I asked Husband to scrape the stovetop stains last week. With equanimity he announced that he had just vacuumed and was done for the day. “I’ve done enough,” he declared pleasantly. I marveled at the male self-preservation mechanism in action. Granted, that was a lot of carpet. But it was the question corporate executives, business owners, moms, students knot themselves in angst over. When is enough? And he had solved the cosmic conundrum with such ease. Buddha Man just might be able to undo the problem of world peace. I laughed, “Done enough. Imagine mothers saying that. The world would stop.” No skin off his nose, he agreed – feet up, on the couch. I shouldn’t grouse about the responsibilities. It’s a blessing, not a burden, to have places to go, people to see, (aaalll these) things to do. George Eliot debuted at 50, Laura Ingalls Wilder at 65. There are others enjoying their second life publishing in their 70s and 80s. I don’t plan to wait another 30 years to go and to see all that’s in my head but in the meantime, I show up where I’m needed. Whether or not I can show up for myself, I will keep writing large and speak to be heard. Poor Husband.