My husband, Pedro in the Brazili 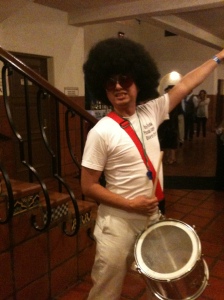 an world of music, teaches Samba drumming to a group of Samba dancers. A month ago, his class from Julie Simon’s World to Dance studio participated for the second time in The Inland Empire Dancing with the Stars competition, an annual fundraiser for the Janet Goeske Foundation. Every year five couples are chosen and paired up with choreographers or studio owners in Riverside. So Julie taught and trained an elderly couple how to dance. The MVPs of the city comprise the panel of judges and include the Mayor and city council members. Because Pedro started teaching at World to Dance last winter, this was the first time drumming played a part in the local Dancing with the Stars.

Pedro helped touch off the extravaganza with a grand surprise. His students interrupted the welcome announcements with their boom boom parade into the room. (You have to know: Samba drums are LoUD.) I got an email of this photo just before their opening number. My fun-loving husband wanted to show me how he’d decked himself out for the night. Back at home he told me he had always felt self-conscious performing Samba without a costume. “Uhhh…you felt self-conscious WITHOUT a costume??” Couldn’t wrap my brain around that one. He explained that he felt naked next to all the dancers in glitzy, colorful array. So he seized the occasion to don the disco wig he for some inexplicable reason had on hand. No one cared that Pedro was mixing music genres. His outfit, like the percussion and dance pizzazz of his group, was a smash hit. And yes, for those echoing the question I’ve gotten before: he is full-blooded Korean. 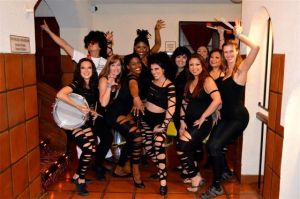 3 thoughts on “Dancing With the Stars – in Riverside, CA”